For better DNA gel extraction results, minimize exposure to UV light as much as possible UV light is notorious for damaging DNA. Cut your gel slice quickly. When working with multiple bands, trim one at a time on the UV as opposed to letting the UV light damage the bands that are waiting to be cut. Alternatively, use a more visible range stain instead of UV light.

The best way to determine the purity of my DNA?

The A260/A230 is another indicator of contaminants, the expected values are commonly in the range of 2.0-2.2, Contaminants such as EDTA, carbohydrates, phenols and have an absorbance close to 230 nm and so will decrease the ratio, whereas guanidine isothiocyanate will increase the ratio. A poorer ratio is therefore often found when extracting using nucleic acid purification columns, although this may not interfere with downstream processes.

Thank you, Tennille Sibbritt from the Children's Medical Research Institute - Embryology Unit, for a great review on our SensiFAST™ SYBR® No-ROX Kit.

"I am preparing samples for RNA-seq using a protocol that has been optimised for low input samples. I performed a qPCR on two housekeeping genes (Actb and Tbp) as a quality control step to ensure good amplification of these genes before proceeding to library preparation. I initially performed the qPCR using a combination of Taq and SYBR, which led to Ct values of 20-22 for Tbp and 23-26 for Actb. I repeated this qPCR using the 200 L sample of SensiFAST SYBR No ROX master mix I received. This worked very well and was quite sensitive. The Ct values for Tbp were 19-20 and for Actb were 17-19, while the no template control had minimal amplification. I plan on using SensiFAST SYBR No ROX master mix in the future, especially since it is substantially cheaper than what I was previously using." 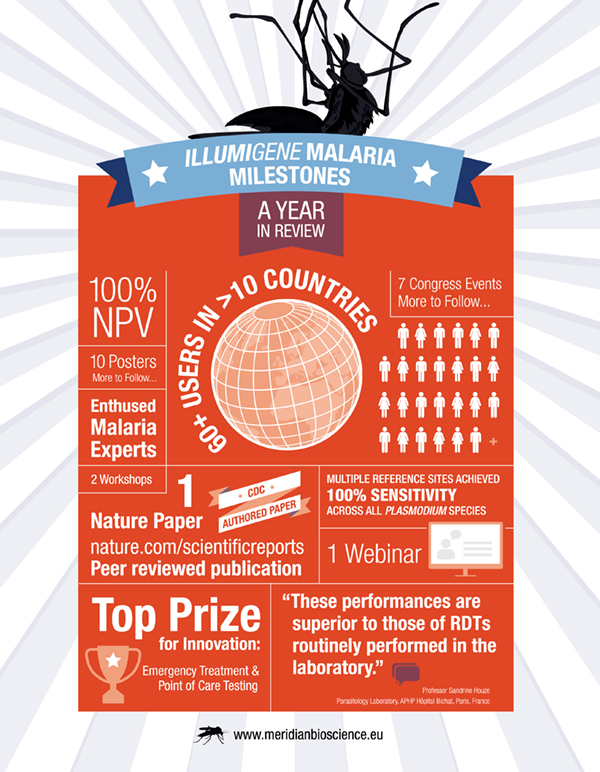 The diagnosis of Malaria (Plasmodium sp.) has remained a critical piece in both the control of this vector borne disease and clinical case management of patients affected by malaria.

Traditional methods of diagnosis have long remained entrenched as the status quo. Methods such as microscopy and rapid diagnostic tests (RDTs) have continued to be used in both non-endemic and endemic settings. Molecular detection methods have emerged, but have so far fallen short of widespread adoption due to a number of key factors: bulky, specialist capital equipment requirements, expense, highly-trained staff with expertise, cold storage of reagents, complex workflows & impractical field use.

illumigene Malaria by Meridian Bioscience, www.meridianbioscience.eu in the space of 12 months has literally transformed molecular diagnosis offering an innovative choice of molecular diagnostic assays suited not only to non-endemic, Western European laboratories, handling imported malaria cases, but serving a crucial role in both the endemic regions of sub-Saharan Africa and the sub-microscopic, low parasitemia reservoirs of asymptomatic carriers - a known source of transmission. This latter group is key in the success or failure of any in-country elimination programme to achieve full eradication of malaria. An expert, namely, Professor Daouda Ndiaye, Dakar, Senegal has remarked in a Malaria World expert blog that “early data suggests it

ISOLATE II PCR and Gel Kit Trim the Gel Slice as Much as possible.

Remove as much excess gel as possible, in front of and behind the DNA. This may sound obvious but many people cut out a square around the gel, paying less attention to the front and back. The more you can remove encasing your DNA, the higher the yields.