Real-Time PCR has become an increasingly popular technique for analysis of gene expression. There are two primary methods of real-time PCR that can be performed. The first involves including the reverse transcriptase step in the same tube as the PCR reaction (one-step). The second method involves creating cDNA first by means of a separate reverse transcription reaction and then adding the cDNA to the PCR reaction (two-step). There are advantages and disadvantages to both systems that you should considered before choosing the best one for your application, these include the ease of use and cost of reaction to the resulting yield and sequence representation. One-step reactions are certainly easier to set up with less overall hands-on time, but do not provide the flexibility and control that is possible with two-step reactions.

Gene-specific primers are used for generating the cDNA and for subsequent amplification in one tube reducing experimental variation since both enzymatic reactions take place under the same conditions, making one-step real-time RT-PCR highly reproducible. There are several other advantages of one-step reactions, these include limited sample handling and reduced bench time, which helps to decrease chances for pipetting errors and cross contamination between RT and real-time PCR steps. This method is quick to set up and makes processing multiple RNA samples easy (especially when using liquid handling robotics), when you are amplifying only a few genes of interest. It is therefore ideal for high throughput screening laboratories where only a few assays are run repeatedly, using well-established reaction conditions, with the added advantage that multiplex PCR of the gene of interest and control genes can be done in single well, from same RNA sample.

With one-step real-time RT-PCR, the quality of the RNA used in the reaction is very important, as all of the cDNA is used for the subsequent PCR step, also the reaction conditions needed to support both the RT and PCR may not be optimal for either reaction, affect efficiency and yield. Because of this, one-step reactions may require substantially more RNA in your initial samples if you are performing multiple amplifications and variation between these different RT reactions can complicate assay interpretation significantly. One-step real-time RT-PCR is therefore generally less sensitive than two-step RT-PCR.

One-step real-time RT-PCR also requires careful evaluation to prevent primer dimer formation because the primers will be present during the lower temperature conditions of the RT reaction as well as the PCR cycling. 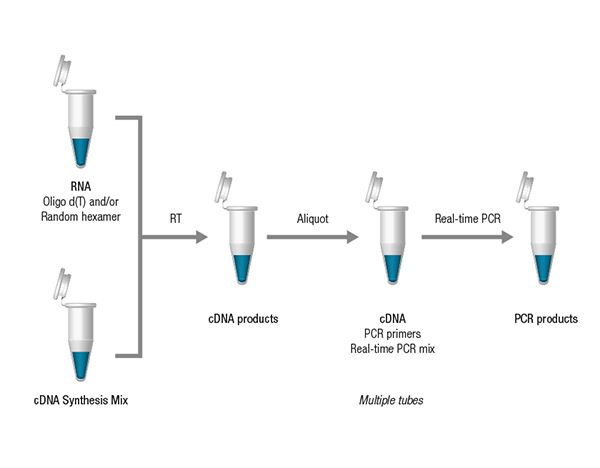 With two-step real-time PCR, the use of several tubes means that it is more time consuming and less adaptable to liquid handling robotics and so more difficult to adopt for high throughput screening assays. The use of several tubes and pipetting steps also exposes the reaction to a greater risk of DNA contamination

Using gene specific primers, one-step real-time RT-PCR such as the SensiFAST™ One-Step kits offer a quick and simple method to detect mRNA and so are useful when analyzing a few genes over a large number of samples as less pipetting and sample manipulation reduces variation and potential contamination. However reaction conditions needed to support both the RT and PCR may not be optimal for either reaction and it is not possible to archive the cDNA produced during the reverse transcription reaction.

Two-step real-time RT-PCR such as the SensiFAST™ kits in contrast, offers a truly accurate determination of mRNA and is useful when analyzing a large number of transcripts over a few samples. SensiFAST™ kits have flexibility in the priming strategy, allowing for oligo-dT, random primers or gene specific primers and are generally more sensitive than one-step as the RT and PCR occur separately and can be optimized individually. Also, the cDNA produced is more stable than the initial RNA sample and can be more easily archived for future use.