*link will take you to our exclusive distribution partner site

SensiFAST HRM Kit has been developed for detailed characterization of samples according to their base composition, length and GC content by high resolution melting. The latest advances in buffer chemistry and enhancers, together with an antibody-mediated hot-start DNA polymerase system, ensure the SensiFAST HRM Kit delivers reproducible, accurate HRM analysis.

SensiFAST HRM Kit contains EvaGreen®, a third generation, saturating fluorescent dye which selectively binds to double-stranded DNA. In contrast to dyes such as SYBR® Green I, EvaGreen can be used at higher concentrations without inhibiting PCR and shows equal binding affinity for GC-rich and AT-rich regions. The combination of our SensiFAST DNA Polymerase, unique buffer system and EvaGreen dye enables amplification and discrimination of even the most challenging sequence differences, such as class IV SNPs without sequence preference. Since it does not require expensive labelled oligonucleotide probes, SensiFAST HRM Kit is also a cost effective alternative to traditional probe based genotyping methods. 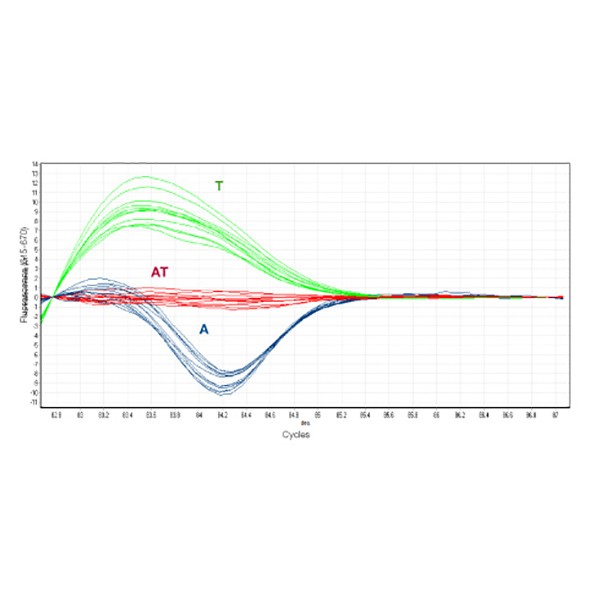 Overview, features and benefits of the SensiFAST product family

A discussion of the pros and cons of each detection strategy.

We used the Meridian SensiFAST HRM mix to discriminate changes at a locus with substitutions on both strands, yielding AT heteroduplexes as well as either A or T monoduplexes. We easily achieved calls on the mono duplexes over heteroduplexes with more than 99% confidence to provide extremely sensitive genotyping of an AT class 4 SNP.

Please refer to the Real-Time PCR Selection Chart to confirm the SensiFAST™ HRM Kit is compatible with your instrument.

All kit components should be stored at -20°C upon receipt. When stored under the recommended conditions and handled correctly, full activity of the kit is retained until the expiry date on the outer box label. Avoid exposure of the EvaGreen to light.